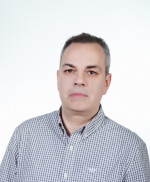 Christophoros Nikou received the Diploma in electrical engineering from the Aristotle University of Thessaloniki, Greece, in 1994 and the DEA and Ph.D. degrees in image processing and computer vision from Louis Pasteur University, Strasbourg, France, in 1995 and 1999, respectively. He was a Senior Researcher with the Department of Informatics, Aristotle University of Thessaloniki in 2001. From 2002 to 2004, he was a Research Engineer and Project Manager with Compucon S.A., Thessaloniki, Greece. He was a Lecturer (2004-2009), an Assistant Professor (2009-2013), and an Associate Professor (2013-2018) with the Department of Computer Science and Engineering, University of Ioannina, Ioannina, Greece, where he has been a Professor, since 2018. During the academic year 2015-2016 he has been a Visiting Associate Professor at the Department of Computer Science, University of Houston, USA. Prof. Nikou was the General Chair of IEEE International Conference on Image Processing 2018 (ICIP’18). Since 2019 he is a member of the Conferences Board of the Signal Processing Society of IEEE. He is also an Associate Editor for IEEE Transactions on Image Processing. His research interests mainly include computer vision, pattern recognition, image processing and analysis and their application to medical imaging. He is a member of EURASIP and an IEEE Senior Member.